Create A Bedtime Routine And Save Your Sanity

Create A Bedtime Routine And Save Your Sanity!

Most new and expecting mothers know that the first thing they lose is sleep – swiftly followed by their sanity.

But it doesn’t have to be this way.

The boundaries you establish with your infant lay the foundation for their behavior in the future. This holds true when discussing sleep patterns, as well. I’m speaking from a place of experience. My son is now 7-years-old and though he isn’t sleeping in between my husband and I at night, he might as well be.

Let me back up a little.

I was unable to breastfeed my son, but that doesn’t mean that I cherished his nighttime feedings any less. If I close my eyes, I can still feel his chubby little body in my arms as I swooped him up from his crib. I remember telling him how proud I was after he slept for three solid hours. In my mind I was probably saying “Thank you.”

I quickly learned the importance of setting the right environment for my son’s nighttime feedings. It’s recommended not to turn on lights, television, or anything else that might stimulate your child. The feeding time should be as calming as possible, with little disruption. I discovered this to be true once I stopped watching the nightly news as I fed him his bottle. He reacted much better when I rocked him quietly in his room, with the light of his giraffe lamp softly cascading on his face.

Once my son was sleeping through the night – or at least 6 to 8 hours at a time, we established a new bedtime routine. I gave him his last bottle of the night in his room, in the rocking chair. His chin lifted, and hands reached up to grasp mine as he sucked the last drops of formula from the nipple. He was awake, but content. I kissed him on his forehead as I placed him in his crib.

One of my all-time favorite baby products as a remote control illuminating mobile. It worked on batteries and a timer. Mounted to the top of his crib, the mobile played soft music and projected moving pictures on the ceiling. The best feature of the mobile was the remote. If the timer turned off and my son became restless, I could restart the music and movement from the cover of his doorway. We all know being spotted by your almost sleeping child means game over.

The day my son turned two, my husband decided it was time to change his crib into a full-size bed - things would never be the same.

My son looked so tiny sleeping in that giant bed. I allowed my fears to dictate his. I worried that he wouldn’t fall asleep on his own, the way he had as a baby. My solution was to stay with him until he fell asleep. We read one book, I kissed his head, repositioned his blanket and sat there. I sat on the edge of his mattress until I saw his thumb fall from his lips and I knew he was sleeping.

I thought I was offering him comfort. What I didn’t realize was that I was actually creating a dependency. After a few weeks of this routine, I decided it was time to let my son fall asleep on his own. That didn’t go over so well. Now my son needed me to sit beside him. He felt he couldn’t fall asleep without my presence. And here we are, 5 years later and my son still asks me to stay with him until he falls asleep.

There are nights he drifts off on his own, out of pure exhaustion following a full day of school, sports, and homework. But on most nights, I take my post beside his bed until sleep sweeps over him.

I created this situation and I wish I hadn’t. If I could turn back time, I would have done things differently. I never would have put the idea in his mind that just because his crib was now a “big boy bed” that anything was different.

This taught me a valuable lesson about motherhood. My actions are a direct relation to my son’s behavior. If I show fear, he feels fear. If I look worried, he worries. This is why, now, I make it a priority to instill my son with confidence, independence, and a sense of pride. Because he’s looking to me for guidance and I want nothing more than to send him down the right path in life. 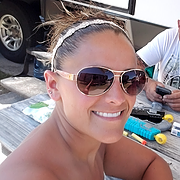 I am a 32-year-old mother and wife of a police officer living in NJ. I have my MFA in creative nonfiction and 10 years writing experience. When I'm not writing I enjoy hot yoga, cardio kickboxing, running, and camping.

Comments will be approved before showing up. How to Protect Your Kids From Beauty Standards | Alexandra Cunningham How soon after giving birth should I start taking lactation supplements? What are the kinds of food to avoid when breastfeeding?